"The Tomb" and Edgar Allan Poe

In 2008, I had the opportunity to share my sound design madness on a film based on a story by one of the true masters of the macabre, Edgar Allan Poe.  Poe's words have always painted such lucid and terrifying sounds and pictures in my head that when I heard we would be working on a film inspired by his story "Ligeia," my creative wheels spun into overdrive.

Directed by Michael Staininger, The Tomb (originally titled "Edgar Allan Poe's Ligeia") is the tale of the seductive and beautiful Ligeia Romanova, a student of witchcraft who, in her effort to further finance an attempt to conquer death, enraptures the rich and successful scholar Jonathan Merrick (not The Elephant Man's Jonathan Merrick), pulling him into her dark and sinister world, and separating him from his soon-to-be-wife, Rowena.  This is a very liberal and unique interpretation of Poe's tale, and rightfully so since the page count for Mr. Poe's "Ligeia" runs about 10 pages long, give or take a paragraph or two.  Also, much of Poe's original story takes place in one location, and most of the action happens in the main character's head, as he anguishes by his wife's deathbed and is tormented by true love and loss.  Michael took the ideas, feelings and the sense of dread that the original literature invokes, and weaved them into an interesting and visually stunning tapestry, blending old world and pagan rituals with dark and modern witchcraft.

The initial spotting session involved the producer, director, picture editor, post production coordinator, and the composers.  There was lots of energy amongst the group, and I was pleased that our collective ideas gelled well in regards to music, sound design and dialogue.  During the session, and in further discussions and emails with both the director and picture editor, I drew upon my knowledge of storytelling, of developing themes and of Poe's literature to help elaborate and enhance the overt and subtle action in the story.
Before the film officially turned over to Monkeyland Audio to begin sound editorial, I was invited to two different screenings of the film.  This was great because it allowed me to experience the work in progress and start coming up with a mental game plan for the sound design.  Picture editor Danny Sapphire is an incredible, poetic and visual storyteller in his own right, and was able to bring the director's stunning vision to life.  His cut of the film really carved out great scenes where the sound design could stand out and be featured.


Our approach to sound design 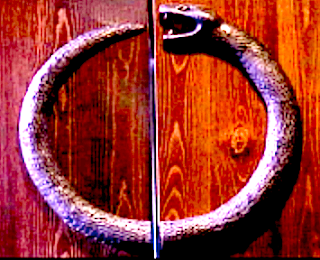 With a strong team of like-minded sound editors aboard,  I set ahead to challenge myself and my team to really create a surreal experience while paying homage to a great American literary figure.  Sonically, there was much to experiment with, and we decided to tackle the soundscape by dividing the creative task into several parts:
Backgrounds and ambiences set the tone of the film, blending natural environmental sounds with drones and atonal elements to convey a sense of restlessness, impending danger, melancholy and plain ol' terror.  The ambiences evolved steadily throughout the film, drawing us further and deeper into the madness that the characters created for themselves.
There's a grey area we cross here in building backgrounds, one in which we dip generously into the sound design pool to create something organic yet supernatural.  We built layers of ambience to support and carry the sound design on those big stinger and scare moments.  It helped greatly that the film had such visually enticing locations, from windy cliff tops, a bleak and dreary mansion, spooky laboratories, an ominous cemetery and a seductive club scene.
For sound effects and foley, the directive was to try and achieve an interesting blend between archaic and sci-fi, combining creaky, rusty and heavy elements with hints of clean, clinical, modern technology.  Here's a sample taken from one of the film's elements, Ligeia's Soul Capture Mask:    Ligeia Soul Mask and Soul Capture Vial strapped on and engaged by peterdaniellago


Though I'd love to recap and discuss each and every single morsel of sound design that went into this film, for the sake of brevity (and so as not to give away every secret), I'd like to focus on some of my favorite elements, mainly sprinkling the soundscape with "Poeisms."

Sonic tributes to Poe in The Tomb

Call it a personal mission, but I wanted to inject subtle nods to Mr. Poe and his other great works throughout The Tomb, while remaining true to the current story being told.  Though not a direct note from our director, there were nonetheless many juicy spots throughout the film where I noticed we could make subtle references to some of Mr. Poe's other famous stories.  Many of these moments grew organically thanks to the great cinematography, a creative picture edit and the big visual effects.  For Poe fans, here are a few things to listen for:
1.  "The Raven":  Of course, how can we not acknowledge this one?  There were several obvious spots in which to recall the famous poem, as well as a few not-so-obvious spots.  The obvious moments were the ones in which a raven flies overhead, obviously.  Since the raven doesn't make his presence felt until the storyline takes us back to Ligeia's ominous Eastern European estate, we were able to keep the amount of references to a minimum.  Once home, the squawk of the dark bird can be heard in distant background as a purveyor of doom.
"The Raven" is also acknowledged during the appearances of Death, personified here as a hooded specter that haunts Ligeia.  As part of the "Death design," we demonically processed my voice crying "nevermore," alluding to the poem's famous line while warning Ligeia of the dangers involved in seeking immortality.
2.  "The Tell-Tale Heart":  The reference for this one came out of a creative decision from the picture editing department.  There's a moment where we transition across several characters in different nocturnal situations.  Though the sound of a heart beating has become quite a recognizable a movie cliche, I believe Poe's poem is what started it all.  In the case of The Tomb, we wanted to use a heartbeat as the central device that tied each character together, and given that one of these characters was on his hospital deathbed, the shape of the heartbeat evolved from mechanical to natural.  Slowly, as that heartbeat evolved, we took out all backgrounds, fx, foley, design and dialogue, leaving the heartbeat all alone, front and center, loud and up in your face, reminding us of what the unnamed narrator in "The Tell-Tale Heart" must have heard coming up from underneath the floorboards... and similarly, symbolizing the guilt that terrorized Jonathan in his sleep, jarring him awake.
3.  "The Pit and the Pendulum":  The reference here was a bit of a stretch, as an actual torture device was not employed in The Tomb.  However, during a dark and transformative moment for the young character Loralai, the filmmakers cut away to the slow swinging pendulum of an ancient grandfather clock.  Each time we cut back to the clock, we're a bit closer and the camera and lighting work to create an uneasy feel.  Sonically, we went from a smooth and steady pendulum to a more sinister sounding, heavy and creaking, archaic and mechanical, swinging axe of death.
4.  "The Masque of the Red Death":  After having his soul stolen by Ligeia, one of her university professors stumbles back into the faculty cocktail party, his eyes leaking blood, his vision blurred by the red liquid...   The scene hints at "Masque," and good visual effects and picture editing gave us that "red death" point of view.  The sound design here included ghostly wails and deathly drones to support the actions of the poor professor.
5.  "The Casque of Amontillado":  Having perfected a way to capture souls, Ligeia keeps said souls corked in dusty wine bottles, in a cellar laboratory.  I am a big fan of irony, and the same way Amontillado sherry was used to trap the supposed-connoiseur Fortunato, I thought it would be nice to develop the basis for the soul captures and the soul vibrations from the resonance of wine glasses.  I employed the use of several different types of glass, including champagne flutes, pinot noir and chardonnay glasses, as well as glasses used for enjoying a good port.  I filled the glasses to different levels with both water and wine, wet my fingertips and recorded the sounds of my fingers along the rim of each glass.  In editing the sounds, I combined different tones together to create individual "frequencies" for the captured souls, some harmonic, some dissonant.  Check out the full design for what a captured soul sounds like:   Ligeia Successful Soul Capture, Full Design by peterdaniellago


6.  "The Fall of the House of Usher":  Ligeia's childhood mansion is large, dark, scary and "haunted." We approached the design for the house and the grounds as if this were the shell of a once-magnificent manor, and the third act of The Tomb surely allowed us to borrow generously from "Usher."  Having read "Usher" many times, I remembered the sheer terror that Roderick Usher must have felt knowing his sister Madeline had returned from the grave, and used that as an emotional basis for designing the ghostly and terrifying domain in The Tomb.

I wanted to share my experiences working on this film for quite some time now, partly because I put so much of my heart and soul into it, but also in part because I feel the sound design of The Tomb has gone a bit underrepresented in the press.  I've read quite a few articles about this film already, and except for giving the wonderful score (by Patrick Cassidy) a bit of positive praise, none have bothered to mention the rest of the film's sonic landscape.  I hope, then, that this brief blog can serve that purpose, and that it has helped shed a bit of understanding on how profound and impacting a good soundscape can be to a project.


The Tomb is scheduled for its U.S. DVD release next week (September 28th).  Please check out The Tomb's official website for lots more information (and to hear a bit more of our sound design)!
Posted by Peter D. Lago at 3:48 PM