Sharing My Sonic Madness: MPSE and the Golden Reel 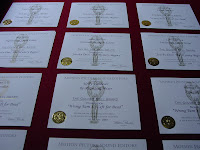 The Motion Picture Sound Editors hold an annual banquet to celebrate a year's worth of hard work and to bestow Golden Reel awards to sound editors who have shown excellence in several categories.  Earlier this year, I (along with my cohorts at Monkeyland Audio) was fortunate enough to have been nominated for work done on 2009's direct-to-DVD horror film Wrong Turn 3: Left for Dead.  Though the film didn't bring home the gold, I was nonetheless honored and extremely flattered that it was even recognized by my peers at all.  I should mention that the Monkeyland dialogue team was also recognized for their work on the made-for-television live-action prequel Scooby-Doo! The Mystery Begins.

Well, the time is upon us again to submit entries for this year's Golden Reel Awards.  I find myself reflecting upon everything that has happened in 2010 and on all the work that I did, and despite a difficult economic landscape, I was fortunate to have spent most of the daylight hours this year cutting sound effects.  So, as I peruse my resume and scroll down my credit list on IMDB, I can't help but beg the question:
What film(s) that I have contributed to (and that have been released this year) could stand a chance at garnering a bit of recognition from the MPSE and its voting members?

Many of the films I work on are of the independent type, and some of those films go on to do well at different festivals across the world.  However, since showing at a film festival doesn't really count as an official release date, those films cannot be considered for a Golden Reel.  Bummer.

Other films I work on sometimes forego the festival route altogether and instead head directly to film markets in search of distribution.  But, unless they're sold and released by the end of the year, those films can't be submitted for consideration either.  My list dwindles!

Occasionally though, I'll be part of a film with established distribution channels (either theatrical, made for television or straight-to-DVD).  Now these are the films which maybe can bring us a nomination at the Golden Reels, or at least qualify us enough to be able to just submit!  Thankfully, I've been lucky to have worked on some of these projects this year!

So where does that leave me?  Of the twenty-five or so films I've completed this year, I would say there are probably less than a handful that can actually qualify for submission for a Golden Reel, but only probably two films that could really stand a slight chance at receiving a nomination.  One of them is about bloodsuckers; the other about monkeys.


I've blogged about them previously, and as I prepare the paperwork for this year's submission, I look back and relive some of the fond memories I've made working on these films.  I also realize that, win or lose, I love what I do and that the real reward comes in knowing I've done the best job that I could possibly do.


2010 has been an extremely challenging, yet character-building and enlightening year for me, but I am absolutely grateful for everything I've experienced and have participated in. I look forward to whatever comes next, and I will remain golden every step of the way.


Good luck to all the sound editors who are submitting.  Let's hope 2011 brings us good fortune and an overabundance of work!!!

Email ThisBlogThis!Share to TwitterShare to FacebookShare to Pinterest
Labels: Sharing My Sonic Madness