My Sonic Philosophy: Motivation and My Beautiful Madness

The timeless question posed by actors around the globe as they run lines in rehearsal, during table reads or before the camera begins to roll has become a bit of a cinematic cliche but nonetheless, it is a very important question... one whose answer is critical to the development and outcome of a story.

Yes, it is ultimately the actor who must pull off the performance of a lifetime, but the responsibility of answering this question should not fall solely on the shoulders of an on-screen performer.

In the grand spirit of collaboration and interpretation (and in my honest and unsolicited opinion), the question of "motivation" should be asked repeatedly from pre-production all the way through to the end of post production, and under the creative guidance of a good director, it should be asked to each and every contributing member involved with bringing a story to life.


As I see it, there exists a symbiotic relationship between the characters in the script and the large body of people involved in the process of making the film.  A character's journey lies in the hands of many people, from the writer, director and actor(s), to the DP, camera operator, picture editor and sound crew.  We are a part of the characters on paper, and as such, we have just as much at stake.
Similarly, one can take the topic of "motivation" to another level.  I propose we all take a good, strong look inward and test ourselves on each new project.  It is imperative that we discover/re-discover something new and unique about ourselves that can breathe life into the character's story as well enhance the overall cinematic experience.

Sound Editing: What's my Motivation?
A wrapped film only partially answers the infamous question, and during post production, staying focused on the character's motivation can help steer the storytelling in the right direction, hopefully anchoring it to an organic place that makes sense. In post sound, defining and discovering the motivation of a character happen during the initial spotting session, during subsequent meetings or communications, and most definitely during the sound reviews. It also helps to read the script and to discuss with other members of the sound crew the best way to enhance or sonically illustrate.

In posing that same question to myself, as a sound editor, I take the responsibility of exploring said question very personally and very seriously. I challenge myself to leave my sonic footprint on a film and I make it my goal to translate that motivation into the language of sound.

Put everything you have into each show, and your essence will live forever.

My journey into sound has not only allowed me the chance to further develop my editing and predubbing skills, but has also granted me the great opportunity to learn more about myself as a person.  With every project, I dig deeply into my metaphoric arsenal of "things inspirational" and challenge myself to uncover something new. In addition to the spotting session, et al., I also do quite a bit of personal reflection before cutting or building custom sounds for a film. I find that music, literature, nature and old memories are strong motivators for me.

Examples from My Metaphoric Arsenal
I've blogged extensively about working on Edgar Allen Poe's The Tomb, but before even cutting one frame or designing one sound for that film, I listened extensively to music by Chopin and Mahler, and re-read my worn-out tome of Poe's works. I also sat in the dark in complete silence. Doing so proved both therapeutic and inspirational. It helped me find the spooky and also provided much fuel for creating a layer of terror to underscore Ligeia's terrifying plot. 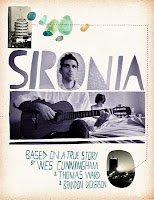 For Sironia (a film about a musician on the eve of stardom who gets the rug pulled out from under him), I listened to both the Beatles' "White Album" and "Revolver" repeatedly. I usually get lost in those two albums, much like the lead character gets lost in his own music.  Connecting with the lead character on this level helped me to design ambiences that conveyed loneliness and the struggle to find ones place in a changing world.

On WW2 zombie flick War of the Dead (which I've also blogged about extensively), I listened to Woljciech Kilar's opening theme from Bram Stoker's Dracula before and during the editorial process.  I've always found that piece to be timeless and reminiscent of Universal's classic horror films, but also frightening and extremely intense. Since I provided all backgrounds and eerie ambiences on WOTD, this composition sparked tons of creative motion and served as fuel for those haunted moments in the gloomy graveyards and trenches, in the creepy forests, and throughout the labyrinth-like and zombie-infested bunkers.

For Space Chimps 2: Zartog Strikes Back, I relied on my memory as a primary source of inspiration. Thinking back to my childhood, in particular, the magical films I'd watch over and over again, I remembered the sonic landscape created by Ben Burtt in The Dark Crystal, and used those memories as the basis for designing the sounds of the alien planet, Malgor.  Those memories of sound helped me make Malgor a real and organic place, and more importantly, they helped make the planet all that Comet (the Chimp) hoped it would be. In figuring out my own motivation, I help fulfill Comet's goals. Symbiosis.

I consider Neverwas to be a personal career favorite of mine, and on this film I really focused on the grandness of nature as well as its minutia to sell both Zachary's and Gabriel's worlds, both real and fantastic.  In many cases, distinguishing real from fantasy can be difficult for some people and so I look inward to find a place where that very notion is true for most people: Childhood. I remembered places I loved to visit as a child. Lake Tahoe. Disneyland. The park across the street from my parents' house. I remember the smells of childhood. The taste of candy and fun food. The feelings you'd get on Christmas morning. The anticipation from the night before... Still, the underlying themes of sadness, loneliness and heartbreaking loss are inherent in both the lead characters, so I looked again at my life, at moments where things just didn't seem to add up or make sense. Moments of sadness or heartbreak. Breakups. Funerals. Rejection. Loss.

Both places, the happy and the sad, coexist in this film at all times, making the background landscape beautifully melancholic. Beautifully mad... 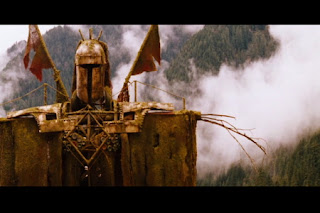 Conclusion
Years ago, I coined a phrase for myself to describe what it is that I do (or at least think that I do): Beautiful madness.  It came to me after spending a lot of time in Neverwas.  Though Neverwas happened early in my sound career, I feel lucky to have discovered my own motivations and call to action as a result of trying to define those of Gabriel's and  Zachary's.


Injecting "beautiful madness" into the sonic landscape of a film is what I set out to do regularly on each and every film, and with the guidance and support of a good director, a creative and collaborative sound crew, and a little inspiration from within, I look forward to etching out, developing and defining a character's motivation while further learning about myself.

Email ThisBlogThis!Share to TwitterShare to FacebookShare to Pinterest
Labels: My Sonic Philosophy