My Sonic Madness: Theaters, Festivals, On Demand and More!

In my blog entry from March 2011, I gush about how many of the films I had worked on to date were making waves on the festival circuit, dazzling audiences and enthusiastically driving towards the lucrative and coveted distribution deal.  Now one year later, I'm proud to say that several of those films have found homes with distributors and are either available right now or are getting ready for their theatrical debuts.  Some projects are being released on DVD, while still others are preparing to attack the festivals.   Here's a quick update:

Losing Control - a quirky romantic comedy about a female scientist who wants proof that her boyfriend is "the one" - premiered at New York City's Quad Cinemas on March 23rd to very receptive audiences.  The film will make its way to Sacramento next, and then continue on to several other major American cities this summer.  Please visit the official website for a complete listing of cities.  Once again, I congratulate  writer/director/producer Valerie Weiss for winning herself an audience last year at so many festivals, and for finally securing an amazing distribution deal.  Working with Valerie was such a special treat for me.  She is inspiring and her approach to film making is refreshing and real.  In fact, it was my amazing experience working on Losing Control that led me to creating this very blog.  Thank you, Valerie, for the inspiration!

Working with Aaron Rottinghaus on Apart was an equally thrilling experience.  I've never put so much of my darkside into a film as I did on this one!  Apart - the journey of the tragically star-crossed Noah and Emily who are linked by a rare psychological disorder - made its theatrical debut at NYC's Quad Cinemas on March 9th, with a simultaneous release online.  The film has also found audiences in Houston, San Francisco, and Minneapolis, and I've got a strong feeling its fan base will continue to grow!  While you wait for Apart to debut at a theater near you, I highly recommend watching it On Demand, or downloading it from Itunes or Amazon.  Please visit the official website for more information.  Thank you Aaron for sharing your madness.  I hope my craziness worked for you! 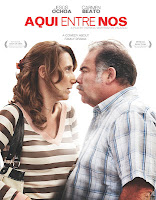 This Friday, March 30th, Spanish-language dramedy Aqui Entre Nos will make its theatrical debut in Mexico.  The sound crew from Monkeyland Audio and I had a great time working on this film, and writer/director Patricia Martinez de Velasco was an absolute delight to work with.  The film - a bittersweet look at a family, its trials, its secrets, its successes and its failures - boasts a talented, well-rounded cast, a strong script, warm cinematography and locations, and a delicious soundtrack by Victor Hernandez Stumpfhauser.  For more information, please visit Aqui's official website.  Gracias to Patricia and all the folks at Corazon Films and La Banda Films.  I wish you all much success!

Rock-and-roll drama Sironia is on its way to the Dallas International Film Festival!  Brandon Dickerson's story - about a broken musician struggling to find peace within his music and his family - has lots of rhythm, lots of blues, a memorable soundtrack, and outstanding performances.  Sironia screens on April 17th and 19th.  Nice work, Brandon.  Lots of luck in Dallas! 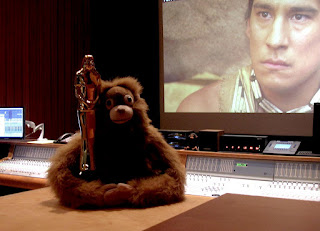 I am proud to announce that the National Cowboy & Western Heritage Museum has chosen to honor Yellow Rock this year with the prestigious Wrangler Award for Outstanding Theatrical Motion Picture (April 20-21).  The plot itself is quite the adventure, but equally intriguing is the backstory and time period that serve as the foundation for the journey.  I applaud Lenore Andriel, Steve Doucette, and the amazing cast and crew of Yellow Rock for all their hard work in bringing this story to life.  Thank you Lenore for trusting Monkeyland Audio with your sound.  We are honored to be part of your Tribe.

Also on April 20th, Western noir Heathens & Thieves will make its world premiere at the WorldFest-Houston International Film Festival.  I had a blast working with John Sinclair and Megan Peterson on this one.  This beautifully shot period drama is filled with melancholy, loneliness, anger, passion, love, hate, revenge and pain... and I had a fantastic time helping to discover and create the sonic heartbeat for the piece.  If you're out in Houston, do not miss this one.  Lots of wicked fun!

The John Gulager-directed splatter-fest Piranha 3DD explodes into theaters on June 1st.  Summer is suddenly very unsafe!  This film is just as funny as it is disgusting, and was a hell of a fun project for me and the crew from Monkeyland Audio to work on.  The schedule was extremely tight, and the amount of sound work extremely heavy, but we pulled it off and the final mix sounded great.  This makes our fourth official collaboration with John Gulager (the Feast trilogy), and we look forward to more blood-curdling experiences with him.  Check out one of the official trailers here!

Writer/director Brian Jun's bleak drama Joint Body will also be available this summer, hitting DVD, Itunes, Video on Demand and other new media venues on July 24th.  I blogged about my experience working on this film in 2010, and I'm totally psyched that its finally being distributed.  Brian is super cool and I know this film will go on to get him more work as a director.  Joint Body stars Mark Pellegrino and Alicia Witt, and I highly recommend you add this to your list of films to view.  Congrats Brian!

I am excited to see that all the blood, sweat and tears the Monkey crew and I have put into these projects is paying off.  Mostly though, I feel blessed that these filmmakers have come into my life and allowed me the opportunity to share with them my sonic insight and my skewed, weird and mad approach to post sound.  I wish each of you nothing but the absolute best.  May this year be your best one yet.